skip to Main Content
Sunday Schedule: Live virtual service at 9:00am, in-person service at 10:30am

The cemetery, which surrounds the Meeting House, reflects a great deal of history. The earliest burials are recorded in the 1720’s. There are many stones in the cemetery that collectively present a lesson in the history of the church and our country. It is also the burial place for veterans of many of this country’s wars, and each grave is marked with an American flag. 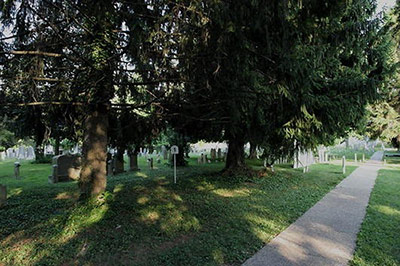 Marker 1:
This marker designates the approximate center of the original log Meeting House erected in 1722 by the sixteen charter members of the church.

Marker 2:
In Memory of Morris Edward who departed this life, May ye 23, An Dom, 1737, Aged 54. This is the oldest legible stone in the cemetery. Morris Edward was a charter member of the church. 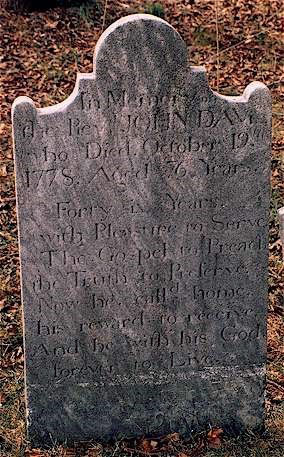 Marker 3:
This stone marks the grave of the minister with the longest service. It reads:

Forty-six years with pleasure to serve
The Gospel to preach the truth to preserve,
Now he’s called home his reward to receive
And be with his God, forever to live. 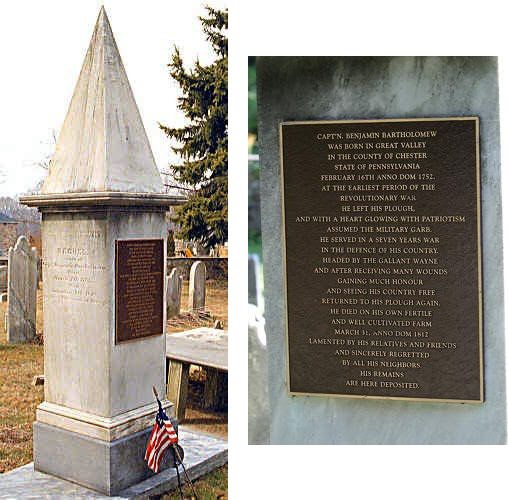 Marker 4:
Beneath this handsome obelisk lies Captain Benjamin Bartholomew, a farmer and soldier. The inscription tells of him leaving his farm in the Great Valley, joining “Mad” Anthony Wayne, and serving with him during the Revolution. After the war, he returned to his plough and died in 1812. 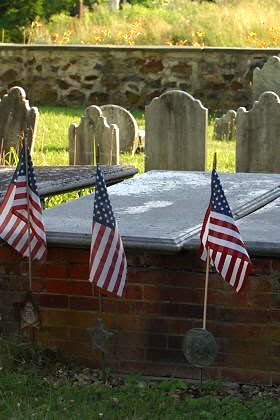 Probably the most famous, and in the eyes of the British, the most infamous person buried in the cemetery. Minister of the church at the outbreak of the Revolution, he joined the Continental Army and became Anthony Wayne’s chaplain. An outspoken patriot, his words were so vehement that the British put a price on his head.

We have mention of him in this excerpt from a letter by General “Mad” Anthony Wayne to Benjamin Franklin:

We are so far removed from the seat of Govern’t of the free and independent states of America — and such an Insurmountable Barrier, Albany, between us that not one letter, or the least intelligence of anything that’s doing with you can reach us. Through the medium of my Chaplain (David Jones) I hope this will reach you as he has promised to blow out any man’s brains who will attempt to take it from him… 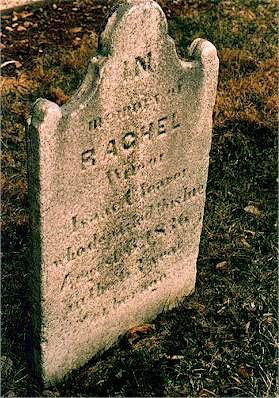 Marker 6:
In memory of Rachel Cleaver, wife of Isaac Cleaver, who departed this life August 16, 1836 in the 63rd year of her age.

This woman left the Baptist Church in the Great Valley in 1821, along with her husband, a blacksmith, and four of her nine children, as well as five other members of the congregation, to participate in a mission to the Cherokee Indians in Valley Town, on the border of North Carolina and southeastern Tennessee. She returned in December of 1823.

Marker 7:
Rev. Leonard Fletcher, Died August 16, 1859 in the 63rd year of his age. Peace to his memory. “Remember the words I spoke unto you while I was yet with you.”

Rev. Fletcher was minister of the church from 1832 – 1840, and during his ministry, baptized 448 people. He also was one of the leaders of the Chester County Wilberforce (anti-slavery) Society. 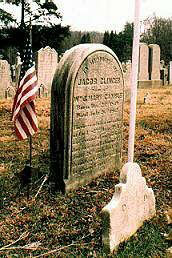 Marker 8:
This is one of several stones having the same basic message:

Marker 9:
This stone is controversial because the inscription is inaccurate.

Erected by the Great Valley Baptist Church, in memory of Phyllis Burr, who was born in Africa, brought to America in the Slave Ship “Ganges,” and sold into slavery to pay for her passage, and died April 18, 1872, aged nearly 100 years.

In fact, Phyllis Burr was rescued from a slave ship, the Phebe (sometimes spelled “Phoebe”), by the American Naval vessel, the Ganges, and taken to the free port of Philadelphia where it was certain that she would not be sold into slavery. She and her fellow Africans were assigned to a Quaker relief organization and indentured to families, not so much to pay for their passage but to provide them a living circumstance, albeit not one of their choosing.

Phyllis was elderly when she died but judging from her probable age when she was kidnapped by slavers, she was more than likely in her eighties.

Click here or here to learn more about Phyllis Burr and the other Africans brought to Philadelphia on the “Ganges.”

Click the photo to enlarge the image of the original indenture contract for Phyllis Burr: 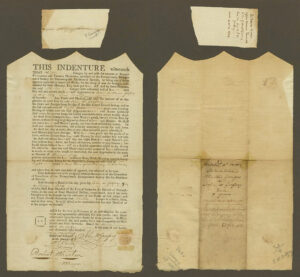 The star shaped flag holders scattered around the cemetery designate soldiers from the Civil War. Those killed in the South were allowed to be moved north if their families provided burial plots. The church offered lots to those who could not afford a family plot. As a result of this gesture, local veterans groups conduct a Memorial Service here on the Sunday before each Memorial Day.

The battle for freedom still goes on as is evidenced by the American flags in the newer sections of the cemetery. These flags mark the graves of veterans of five later wars — Spanish American, World Wars I and II, Korean War and Vietnam War.

Copyright 2022 by The Baptist Church in the Great Valley. All rights reserved.
Back To Top
Search